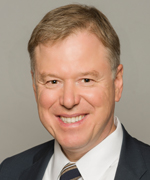 Upon returning to Canada, he established himself as a leader in the management of colorectal cancer. He has served as Head of the Division of General Surgery at Sunnybrook, Chair of the Division of General Surgery at the University of Toronto and Chief of the Odette Cancer Program and Regional Vice President for Cancer Care Ontario. Most recently, Dr. Smith has served Sunnybrook as its Executive Vice President, Chief
Medical Executive.