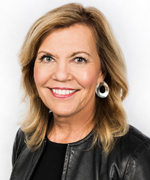 As a mother, lawyer, businesswoman, and entrepreneur, Christine Elliott knows how to bring people together. She knows the importance of balancing a family budget and how to manage a successful business.

Christine graduated from the University of Western Ontario with a Bachelor of Laws degree. She then built a successful career in business and law, working first as an auditor at one of Canada’s largest banks. Christine later co-founded a law firm with her late husband Jim Flaherty, where she specialized in real estate, corporate law, and estate law. Christine has worked tirelessly to help businesses all across the province expand and thrive.

Christine also used her business and legal expertise to pursue her commitment to public service.  Her pro bono legal work for charitable organizations gained her the recognition as a Rotary International Paul Harris Fellow, the highest award with Rotary.

As well, Christine is a co-founder of the Abilities Centre in Whitby, a facility built with the vision of celebrating all people, regardless of ability. The centre has become a hub of its community, hosting various Parapan Am Games events in 2015.

In 2006, Christine was elected MPP. She has won five elections, and for nine years has served the people of Ontario at Queen’s Park, including six years as Deputy Leader of the PC Party.

In 2016, Christine became Ontario’s Patient Ombudsman, where she fought for better access to health care for all.

She currently serves as the Deputy Premier of Ontario, Minister of Health and is the MPP for Newmarket-Aurora.