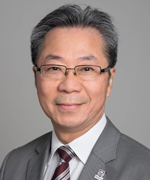 Dr. Davy Cheng is the Dean (Acting) & Distinguished University Professor at the Schulich School of Medicine & Dentistry, Western University. He holds the Chair in Evidence-based Perioperative Clinical Outcomes Research (EPiCOR) and is the co-founder and Medical Director of the Centre for MEDICI (Medical Evidence, Decision Integrity, Clinical Impact), which is a World Health Organization (WHO) Collaborating Center in the study of global perioperative surgery and anesthesia care. Dr. Cheng served as the Chair / Chief of the Department of Anesthesia & Perioperative Medicine, London Health Sciences Centre, St. Joseph Health Care London, Western University from 2001-2017. Dr. Cheng is also the founding Medical Director of the Cardiac Surgery Recovery Unit (2002), Critical Care Medicine Division, Department of Medicine, at LHSC.

Dr. Cheng is a globally recognized healthcare leader in the forefront of research, practice and healthcare policy in the fields of surgical perioperative and anesthesia care, cardiac surgery and critical care medicine. His pioneer work in fast track cardiac anesthesia and recovery has become the standard of cardiac anesthesia and recovery practice around the world. Dr. Cheng was awarded the Canadian Anesthesiologists’ Society Gold Medal (2015) and the Canadian Society of Physician Executives (CSPE) Excellence in Medical Leadership Award (2014). He received the Distinguished University Professor Award at Western (2010). In 2007, Dr. Cheng was elected a Fellow of the Canadian Academy of Health Sciences (FCAHS), and the Joint MAC Award at St Joseph’s and LHSC. In 2017, Dr. Cheng was appointed as Vice Chair of Innovation Fund Provincial Oversight Committee (IFPOC); and he served as former Chair of the Ontario Blood Advisory Committee (OBAC) at the Ministry of Health & Long-Term Care (MOHLTC) from 2012-2016.

We're not around right now. But you can send us an email and we'll get back to you, asap.