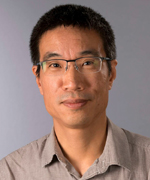 Dr. Michael Kiang received his undergraduate degree from Harvard College and his MD from the University of Toronto, where he also completed Psychiatry residency. He then obtained a PhD in Cognitive Science at the University of California, San Diego. Subsequently he was on faculty in the Department of Psychiatry and Behavioral Neurosciences at McMaster University. In 2014, he joined CAMH as a Staff Psychiatrist and Clinician-Researcher in the Complex Mental Illness Program (Schizophrenia Division). He is a Clinical Scientist in the Temerty Centre for Therapeutic Brain Intervention. He has received research funding from the Canadian Institutes of Health Research, the Social Sciences and Humanities Research Council of Canada, the Ontario Mental Health Foundation, the American Psychiatric Institute for Research and Education, and the Brain and Behavior Foundation (NARSAD). Dr. Kiang’s research uses cognitive neuroscience methods, such as event-related brain potential (brainwave) recordings, to investigate the neurophysiological basis of cognitive abnormalities and their relationship to symptoms in schizophrenia and related disorders.