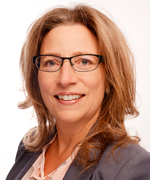 Dr. Fleming is currently Professor in the Department of Obstetrics and Gynecology at the University of Ottawa where she enjoys a full practice in Obstetrics and Gynecology at The Ottawa Hospital (TOH).  In addition, she is the Head of the Pediatric and Adolescent Gynecology Division at the Children’s Hospital of Eastern Ontario (CHEO), where she is on Active Staff.  Furthermore, she is Fellowship Director in PAG, a bilingual fellowship she developed and implemented in 2012.

Dr. Fleming has been actively involved with continuing medical education and with professional organizations such as the SOGC (Society of Obstetrician and Gynecologist of Canada) and NASPAG. She was Co-Chair of the SOGC committee of Pediatric & Adolescent Gynecology and Obstetrics (CANPAGO), which she helped create in 2001. In addition, she was Program Chair for the Annual Clinical meeting (2008) and Co-Chair of the Resident Education Committee (2012-15) and past member of the Board of Directors (2005-08 and 2014-17) at NASPAG.

Dr. Fleming has received several teaching and clinical awards including the prestigious Minister’s Medal Honoring Excellence in Quality and Safety (2013) for her leadership in establishing the innovative outreach Adolescent Obstetrics Program at St. Mary’s Home, in partnership between TOH and CHEO.

Her special interests include Clinical management, Education and Research in Adolescent Obstetrics and Pediatric Gynecology.