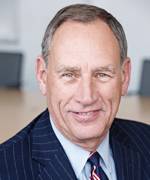 Dr. Toby Cosgrove is a physician executive with strong interest in emerging technologies, and the potential of machine learning and AI to improve patient care.

Toby Cosgrove is Executive Advisor and former CEO and President of Cleveland Clinic. Serving from 2004 through 2017, he led the $8 billion organization to new heights of achievement and efficiency, seeing it ranked the #2 hospital in America (U.S. News).

In his role as Executive Advisor at Cleveland Clinic, he is working with leadership on strategies for national and international growth. His telehealth initiatives like Express Care Online, are Cleveland Clinic’s fastest-growing online portals.

He additionally serves as Executive Advisor, Healthcare & Life Sciences for Google Cloud where his role is: improve the patient care experience, improve population health and reduce the per capita cost of healthcare.

Long before serving as CEO at Cleveland Clinic, Cosgrove earned a Bronze Star for his service in Vietnam. Later, during his nearly 30 years as a cardiac surgeon, he performed 22,000 operations. He was considered an expert in valve repair. He also holds 30 patents for medical and clinical products used in surgery. As president and CEO at Cleveland Clinic, he initiated and drove major initiatives, such as creating best practices in healthcare, ramping up focus on patient outcomes and improving patient experience.

“When I finished (working at Cleveland Clinic) I began to think about where healthcare is and where it’s going… We are swimming in data. The total amount of data and healthcare knowledge is doubling every 73 days.” He said that the problem companies like Google and Microsoft are working on is how to store that data, categorize it and analyze it. “The good side is you can begin to mine it and always learn something,” Cosgrove said. “Imagine what we could learn from 300,000 or 1 million patients?

On AI and Emerging Technology

Acknowledging that healthcare has yet to master cybersecurity, Cosgrove saw big strides in artificial intelligence, biometrics and voice technologies as holding considerable potential to help address the industry’s major issues around cost. To take advantage of those opportunities, however, health systems have to undergo digital transformation and decide where to focus resources. “Hospitals are going to have to up their capabilities,” Cosgrove has said. During the Rock Health Summit in San Francisco, Dr. Cosgrove said Google shouldn’t try to win cloud contracts from large hospital systems. He said most large health systems won’t move their entire infrastructures to a cloud system hosted by Google, Microsoft or Amazon because they’ve already spent hundreds of millions of dollars on IT systems from Epic, Cerner and other companies. Dr. Cosgrove said instead of attempting to win cloud contracts from large health systems, Google needs to figure out what types of apps can be added on top of systems from Epic, Cerner and others. Cosgrove thinks the next “killer application” in healthcare will be a voice application that leverages machine learning and natural language processing to transcribe physicians’ medical notes, according to CNBC.