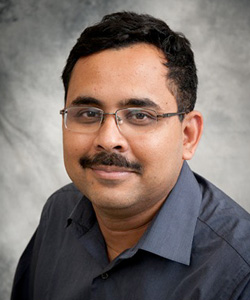 In this project we have shown that  the precise targeting of CO2 in combination with BOLD-MRI can be used as a non-invasive “brain stress test” to identify patients at risk for stroke. This technique of measuring cerebrovascular reactivity (CVR) can be adopted as a routine clinical test in the diagnosis, treatment and prognosis of patients who are at risk of stroke and those with suspected cerebral blood flow abnormalities.This project has helped to improve upon existing methods of risk stratification of patients at risk for stroke, enabling more judicious use of existing resources. In addition, severity of CVR impairment (mild, moderate severe) can now help to triage patients for treatment. This project is now expanding to other centres across the province and the country.

Using carbon dioxide as a “stress” stimuli and functional MRI to measure the brain blood flow changes, we have developed a non-invasive, “brain stress” test to identify patients with poor cerebrovascular reserve i.e at risk for stroke.  We conducted a prospective observational study on 100 patients who are at risk for stroke. Blood Oxygen Level dependent (BOLD) MR images were taken while hypercapnic stimuli were applied using a sequential breathing circuit and a computer controlled gas blender. The MRI and CO2 data were then analyzed using a custom software to generate a color CVR maps indicating areas of good (Red) and poor (Blue) vascular reserves. We identified 76 patients with poor cerebrovascular reserve (Blue CVR)). Out of this 59 patients underwent surgical intervention. After the surgery, 86% (51/59) of patients showed  significant improvement in both CVR and in clinical symptoms.  Hence, this technique can be adapted for routine clinical test in the diagnosis, treatment and prognosis of patients who are at risk of stroke and those with suspected cerebral blood flow abnormalities.