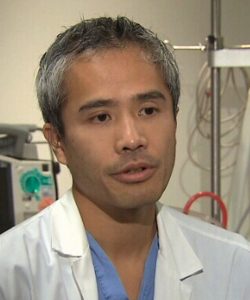 This innovation was a collaborative effort of cardiologists, epidemiologists and basic scientists to obtain a better understanding of factors which may contribute to non-response of clopidogrel (a common antiplatelet drug).  The AFP innovation allowed us to study the role of ABCB1 TT, a newly described genetic variant, in impeding proper response to clopidogrel.  Working with a local biotech firm, this led to development of a novel point-of-care test for the gene.  Adopting the pilot data enabled by the AFP fund, we validated the ability to detect this variant in a randomized study – RAPID STEMI (published in the pharmacogenomics journal).  This further led our group to be awarded a Canadian Institute of Health Research (CIHR) grant to apply this knowledge in a group of patients with non-ST-elevation myocardial infarction (RAPID MANAGE study).

Background: Percutaneous coronary intervention (PCI), a procedure using balloons and stents (wire meshes) to open blocked arteries, is the most common revascularization procedure for coronary disease. Clopidogrel, an antiplatelet drug is used to prevent acute clotting of stents and sequelae of heart attacks and death.   However, some patients do not respond fully to clopidogrel and may suffer adverse events due to unresponsiveness to clopidogrel. One key factor for non-response is the presence of genetic variants, which contribute to impaired metabolism of clopidogrel.  Our group had collaborated to work on new strategies to select out clopidogrel non-responders and improve patient care after PCI.  We had previously designed and validated the world’s first bedside genetic test to accurately identify patients which were carriers of a very common genetic variant (CYP2C19*2) affecting clopidogrel response.  However, this single variant does not account for all genetic factors.  ABCB1 TT, another genetic variant has been suggested to play a role in affecting clopidogrel metabolism.

Purpose: To determine the influence of ABCB1 TT in the altered response to clopidogrel and to apply this knowledge to design novel strategies in antiplatelet therapy.  We performed a retrospective analysis on collected genetic samples from studies in the RAPID program in order to obtain ABCB1TT carrier status.  The objectives included: i) determination of the prevalence of the ABCB1 variants, ii) determination of the association of the TT variant with other genetic and clinical factors in affecting clopidogrel response and  iii) development of a point-of-care rapid test for the ABCB1 variant.

Results: In total, over 300 patients were genotyped.  The overall prevalence of ABCB1 TT was at 32% among patients screened in Ottawa.  Initial analysis did not show a strong correlation of ABCB1 TT to clopidogrel non-response.  However, when we did a secondary analysis of interactions of CYP2C19*2 to ABCB1 TT, we found that the presence of the 2 genetic variants actually provided the strongest predictor for non-response.  Concurrently, we had worked with a local biotech company to integrate ABCB1TT into a bedside genetic test.  Within 60 minutes of obtaining a buccal swab (cheek swab), we were able to detect whether our patients carry these at-risk variants.  We have now validated the test and evaluated its utility in personalizing antiplatelet drugs in a cohort of patients.