Towards earlier detection and personalized diagnosis in Myelodysplastic Syndrome (MDS): a SEAMO-driven initiative of the Canadian MDS Consortium
M. Rauh

Towards earlier detection and personalized diagnosis in Myelodysplastic Syndrome (MDS): a SEAMO-driven initiative of the Canadian MDS Consortium 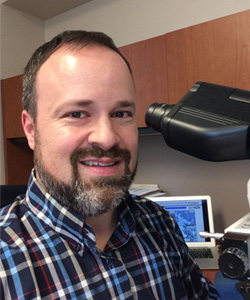 With funds from the AHSC AFP Innovation Fund, we have successfully established the Queen’s Lab for Personalized Myeloid Cancer Pathology and Research (QMyPath – http://www.queensu.ca/rauhlab ).  We have designed a high-throughput, next-generation DNA sequencing assay and have demonstrated its promise for earlier and more personalized detection of myelodysplastic syndromes (MDS).  We have also provided initial evidence that that one of the most common and earliest myeloid cancer-associated mutations, in the gene TET2, skews macrophages in a pro-cancer direction, favouring mutant clonal expansion.  This may eventually lead to novel immune therapy, targeting early clones that initiate myeloid cancer.  These funds and results were leveraged to obtain related grants from the Ontario Institute for Cancer Research (OICR) and the Canadian Cancer Society Research Institute (CCSRI).

Results: I) Towards earlier MDS detection with NGS: MDS is difficult to diagnose in early stages because of heavy reliance on subjective microscopy.  We applied a customized, 48-gene myeloid cancer NGS panel to patients with equivocal bone marrow investigations, suspicious for (but not called) MDS, and compared these to controls and those with known MDS.  Approximately, 79% of equivocal patients carry previously cryptic MDS-associated mutations, not statistically different from diagnosed MDS cases, and with similar burdens of mutant clones. II) TET2 mutations alter the immune environment in MDS: TET2 mutations are among the most frequent and earliest abnormalities in MDS and clonal hematopoiesis of aging. Understanding how TET2 inactivation leads to clonal dominance offers promise for earlier and targeted intervention.  By comparing TET2-inactivation in human MDS and a murine model, we found that loss of TET2 function skews macrophages in a pro-inflammatory direction, favouring the expansion of TET2-mutant clones.

Summary: We have developed an objective genetic test for earlier MDS detection. We have connected a particular mutant gene, TET2, with perturbations in the host immune response, of potential therapeutic relevance.